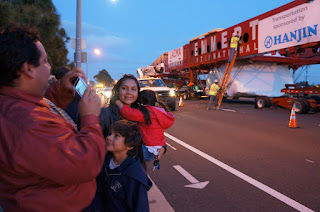 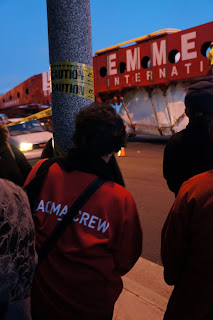 LACMA had several red-shirted volunteers there answering questions and interacting with visitors. They all seemed to be having fun, too. [At dinner, Nan, Jerry, Kay and I agreed that the volunteers should have been handing out pebbles from the quarry, like they hand out fabric swatches at Christo installations. Maybe next time.]
With street traffic reduced to one lane in each direction, you would think drivers would be annoyed or irate. But many of them crept along snapping pix over the steering wheel and leaning out to ask questions. No honking horns, no rude hand gestures.
It seems that the big rock travels with a surplus of good will.  I hope that good will lingers around the installation on Sixth Street!
Posted by Joan at 11:03 PM