Let me say it aloud: demolition is done. There is no going back now.

Once the lathe and plaster were gone, exposing the "bones", Justin called for an inspector. We were on pins and needles, but he delivered the opinions we wanted to hear. Justin and his crew working from John's plans and specifications will make a better structure than we had before. We have approval to proceed with all our design elements (re-sizing windows, shifting a door and removing of a little bit of wall) with one minor qualification (we need to have a new header where that bit of wall used to be). Woo-HOOO!


So about those design elements . . . My mom has had some trouble visualizing what will be where, so I made a little not-to-scale drawing to post here. The old plan is at the top, the new plan is at the bottom. Hope you can see it. Do I need to make it bigger?
Basically, the kitchen and the breakfast room trade places and a new peninsula sporting the range and a range hood divide the two. The idea was to eliminate the pass-through nature of the old kitchen (which had two doors and a big arch), closing up the space between the sink counter and the stove, to create good workflow, more storage and real ventilation. I think this kitchen will be a destination.
The casual dining area will be nice, too, with lots of storage (for small appliances, dishes and stuff including my tool box in a very handy spot). There will be a book shelf near an internet port near new tall windows in the spot that gets great bounce light in the late morning. 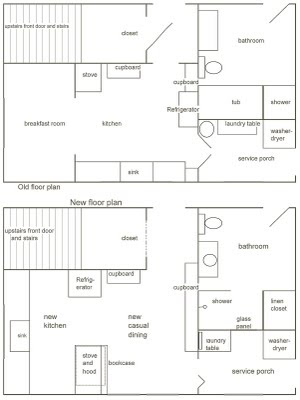 In the bathroom, the idea was to make a place that would be comfortable for my Mom and by extension for me when I get to my "golden years". I had hoped for a nice, Greek-style soaking tub and a shower but that was prohibitively expensive. So I went for a beautifully-spacious and easy-access shower where the tub used to be and a linen closet where the shower was. There will be a tall glass panel for natural light. Note how the toilet tucked into the corner is not the first thing you see when you walk through the door. The wall opposite the door will be 5/8" multicolor travertine tiles surrounding the big glass panel. I think it will be eye-catching.

The service porch/laundry room is basically the same but spruced up and sporting an on-demand hot water unit instead of a big old water tank. You might remember the window between the bathroom and service porch - that will transform into the beautiful glass panel. The under-stair storage areas (front and back) will be freshened-up, too.

* BTW * it just occurred to me that you might post comments. I just discovered that Phill did weeks ago on the question of the dual fuel range. I call that discovery timely as I am really coming down to the moment of truth on the Bosch range. Thanks for the encouragement, Phill.
Posted by Joan at 7:32 AM