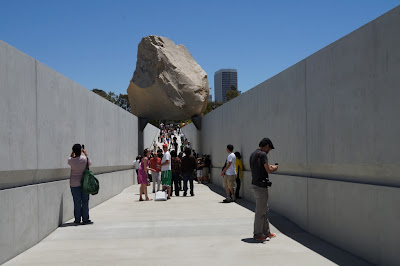 Opending Day at LACMA. Michael Heizer's Levitated Mass. The masses are out there looking and milling around. Lots of pixels firing as people pose with their hands in the air while their friends direct "higher...little bit higher.. now flatter" [snap]

See this guy in the green shorts and billed cap? Watch him. 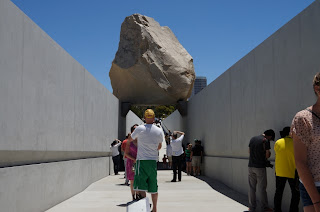 He's making his way up the west end of the trench. Carrying the lady's bag, right? Snaps a picture here and there.

So, as he approaches he says to this little clutch of people
"You know it's the wrong rock, don't you?"

The dark haired lady with the sunglasses catching her breath exclaims "What?!?"
"Yeah" he says, "there was a mix up at the quarry. They put the wrong rock on the transporter."
"No..." we all say.
Yep, he says, "the ART rock is still sitting in the quarry. This is just a rock." And he saunters on. 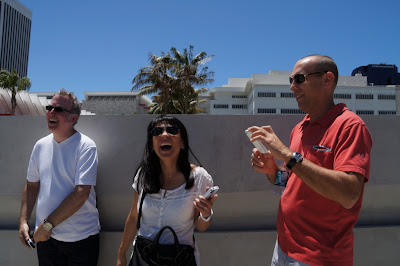 We all look at each other and break out in laughter. We shake our heads muttering "that's a good story!"

A good story levitates the moment.
Posted by Joan at 7:47 AM