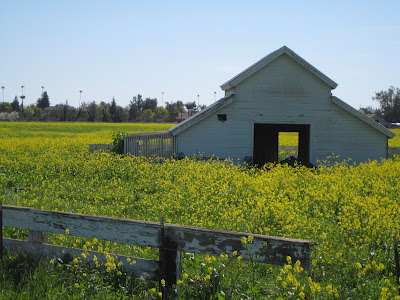 In February 2010, my Mom had a fall at her home in Lindsay. She spent several days in the hospital for diagnostics and then almost four weeks in convalescent care. The family spent a lot of time on State Highways 99 and 65. I snapped this picture on 65, south of Porterville.

When she was released, she agreed to move south, closer to her kids. It was not too long before she was walking laps of the garden at St. John of God Retirement Center twice a day. She participated with Team Marlene in the American Cancer Society's Relay for Life in Exeter in 2010 (four laps of the track) and 2011 (six laps). This year, she was committed to other engagements and had to forgo the relay.

Last month, on July 22, she had a fall at home and has been at St Vincent Medical Center in the weeks since. Now in their Transitional Care Unit, she has daily physical and occupational therapy sessions. It's pretty easy for us kids to drop in and take her for walks and exercises, too. She has been beating me at Gin Rummy and has me on the ropes in an interrupted game of Canasta.

She is a tough, old bird and is making great progress on her return to normal. We are hoping to see her release this week. (With fingers crossed for luck, we are open to prayers and mountain sage. We'll take all the good vibrations we can get.)

Mom may not walk the Exeter Relay next year because the four-hour journey is pretty taxing, but I expect to see her scooting around behind her red walker real soon.  I'd love to see her walking a local relay in solidarity with Team Marlene in May. We'll see.