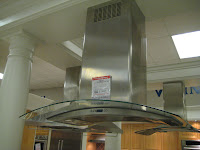 First it was a Broan, then it was a GE Profile, back to Broan. There was a brief interlude when John and I considered assembling an empty hood, lights, filter and inline fan. Then we were back at Broan . . . or GE.
This evening, Judy suggested Zephyr. It was a little above my price point, but upon comparison . . . the fan was much quieter . . . the draw was stronger . . . the coverage was greater. Zephyr was better in the elements that really count. So now I think it will be a Zephyr hood with a glass canopy and a powerful but quiet fan.
What's she got under the hood?
It will be a slide-in stove, for sure, nestled into an engineered-stone countertop on an oak-finish cabinet. Which stove is still up in the air. I loved the KitchenAid until Consumer Reports nixed that on reliability. GE has great ratings but I don't like the burner grates or the knobs. Frigidaire looks pretty good. Judy suggested Bosch.
I remember Bosch - they made really great sparkplugs back in the '70's when my boyfriend maintained my VW fastback and his camper van in cut-off 501's in the parking lot behind our Orlando apartment. They might still make sparkplugs, but they also make good-looking ranges.
I checked out Bosch. Sounds great in the reviews (if you overlook the burnt-out electronic control panels reported in consumer reviews on the web during the fall of 2008). The slide-in stove is dual fuel. A gas cooktop and electric oven give me pause. Some say its the best of both worlds. I don't know - I've always cooked with gas.
Hmmm. It's a dilemma in a beautiful stove, with sturdy burner grates, powerful burners and nice heavy burner caps. The oven is spacious with a window and two oven lights. There is a warming drawer.
If you have an opinion - post it, please!
Posted by Joan at 11:44 PM