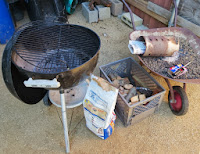 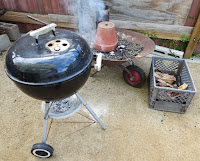 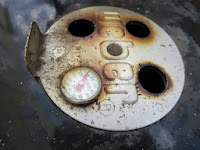 Now it's a matter of keeping an eye on the temperature and adding heat as necessary to maintain about 225°.  Following Janet's example, I have a thermometer in the vent on the kettle lid. Steve Raichlen says you need to supplement the fire about every hour.  My first addition was at 40 minutes in and that was a little too hot for a while. I'm hoping for the best but lower temp for longer time is the path to brisket-success. Also, I am a little concerned because this brisket seems thin to me and I suspect it will get done faster than is desirable.
I'm going to post this and go add some fire to the kettle.
Posted by Joan at 9:45 AM