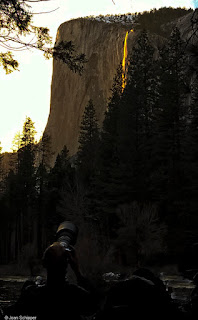 The Horsetail "Fire" Fall is a phenomena, an annual event with mixed results and a "happening" In Yosemite National Park. Nature "schedules" it every year for late in February. People show up in El Capitan Meadow or just across the Merced and wait for the late afternoon golden glow. People have been known to backpack up the south wall of the valley to get a fresh perspective.

Driving to Yosemite, everyone hopes that the waterfall will be robust, fed by ample snow pack, and that the western horizon will be clear. If it all goes as calculated visitors get to see a magic trick with the sunlit glowing waterfall backed by the shadowed wall. If not, well come back tomorrow. Or next year.

The event is well-publicized. In a good year, it gets a lot of attention from local, regional and national press and, of course, bloggers galore. That brings out the crowds. In a promising year, it's a party most evenings. Normal people bring a picnic, maybe a bottle of wine and cheese to go with the show. They might bring lawn chairs - at least a blanket. They show up anywhere between 3:30 pm and 5:00 pm and socialize.

Well-advised photographers bring their longest lenses and something to rest them on. Serious photographers bring really big glass and hefty tripods and backup gear. They stake out their favorite locations starting around 1:00 pm. Then they socialize and kibitz.

This year I was, as usual, in the former category and enjoyed lovely walks from shuttle stop 7 to my locations in time to chit-chat and perch in the shadow of  taller, larger, sometimes camouflaged set-ups. (Camo? Yes, I think they look for birds and other wildlife when they are not shooting waterfalls.)


Friday was promising but fizzled as the sun slipped into a cloud bank. Saturday was very good, though. There were cheers and applause amongst the clicks and buzz of shutters. And there were sighs of relief.

Back at the lodge people will be passing around the camera or maybe a tablet or phone with the bast shots. Then they'll start planning for the next big event and maybe even book a week in Yosemite National Park for next year's firefall.